#Metrojet #Flight9268 (#7K9268/ #KGL9268), an international chartered passenger flight operated by Russian airline Kogalymavia (branded as Metrojet), crashed in northern Sinai on 31 October 2015 at 06:13 EST (04:13 UTC) following departure from Sharm el-Sheikh International Airport, Egypt, en route to Pulkovo Airport, Saint Petersburg, Russia. ISIS was quick to claim that it brought the airliner down. After initially discarding this claim as Propaganda, we are now being told that the flight was brought down by a bomb.


In a radio interview with Seattle-based KIRO Radio, Obama said, “I think there is a POSSIBILITY that there was a bomb on board and we’re taking that very seriously.”

The media has gone viral with the bomb theory, but my attempt in this blog has always been to separate the fact from fiction/ propaganda and to present to my readers an unbiased view so you can make your own decision on what might be the truth and what merely motivated reporting for political mileage or TRPs. So, what is the truth here?

The tail of the aircraft is, in my opinion, at the center of all controversy, and also all evidence, in this case. 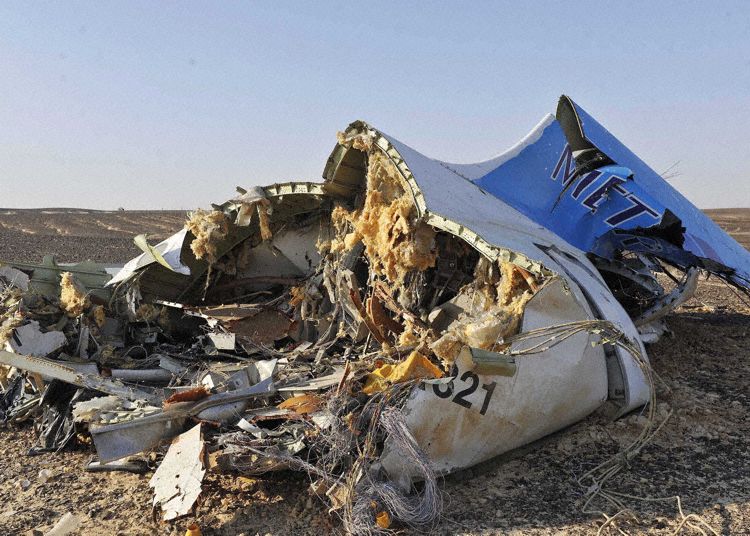 Notice here the very clean break, along the bulkhead joint at the top, with no sign whatsoever of any jagged tear, heat stress or fire. The fin and aft fuselage were about 5 km south of the wing and rest of the fuselage and also about 2.5 Km south of the last radar position. Given that the aircraft was travelling on a generally Northerly track, this indicates that the tail came off first. The photo above shows a clean lateral break at a frame at the top indicating that is where the fracture started and the complicated rupture at the bottom being the final departure from rest of the aircraft as the back end bent off downwards. That would indicate the failure was due to an excessive download force on the horizontal stabilizer or a fatigue failure at the fuselage top adjacent the frame. Following this, pressurization would blow the back end off. Either way, rest of the aircraft would have been pushed forward with an impulsive thrust of a few thousand pounds as the pressurized air released out the back like a rocket exhaust. This would also account for the aircraft skin peeling off outwards seen in some pictures in the press.

The question that begs an answer is, “Why there is such a clean break with no sign of heat stress or fire if this break-up was the result of a bomb?” As can be seen from various images published in the press, fire was localized to the main fuselage body, the section that houses the wings (where most of the fuel is stored) and the central fuel tanks. 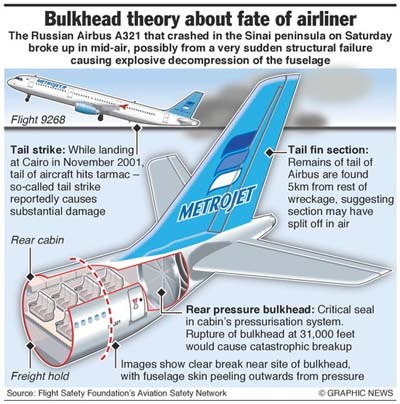 Inflight break-ups because of structural failure are extremely rare, but have happened in the past. Japan Airlines Flight 123 was a scheduled domestic passenger flight from Tokyo's Haneda Airport to Osaka International Airport, Japan. On Monday, August 12, 1985, a Boeing 747SR operating this route suffered explosive decompression 12 minutes into the flight and, 32 minutes later, crashed into two ridges of Mount Takamagahara in Ueno, Gunma Prefecture, 100 kilometres (62 miles) from Tokyo. The explosive decompression was caused by a faulty repair performed seven years earlier. About 12 minutes after takeoff, at near cruising altitude over Sagami Bay, the aircraft's aft pressure bulkhead burst open due to a pre-existing defect stemming from a panel that had been incorrectly repaired after a tailstrike accident years earlier. This caused an explosive decompression, causing pressurized air to rush out of the cabin, bringing down the ceiling around the rear lavatories. The compressed air then burst the unpressurized fuselage aft of the bulkhead unseating the vertical stabilizer and severing all four hydraulic lines. A photograph taken from the ground some time later confirmed that the vertical stabilizer was missing.

China Airlines Flight 611 (callsign Dynasty 611) was a scheduled passenger flight from Chiang Kai-shek International Airport (now Taiwan Taoyuan International Airport) in Taiwan to Hong Kong International Airport in Hong Kong. On 25 May 2002, the Boeing 747-209B operating the route disintegrated in mid-air and crashed into the Taiwan Strait 20 minutes after takeoff, killing all 225 people on board. The in-flight break-up was caused by improper repairs to the aircraft 22 years earlier. The final investigation report found that the accident was the result of metal fatigue caused by inadequate maintenance after an earlier tail strike incident. On 7 February 1980 while landing in Hong Kong, part of the plane's tail had scraped along the runway for several hundred feet. The aircraft was depressurized, ferried back to Taiwan on the same day, and a temporary repair done the day after. A more permanent repair was conducted by a team from China Airlines from 23 May through 26 May 1980. However, the permanent repair of the tail strike was not carried out in accordance with the Boeing Structural Repair Manual (SRM). The area of damaged skin in Section 46 was not removed and the repair doubler plate that was supposed to cover in excess of 30 percent of the damaged area did not extend beyond the entire damaged area enough to restore the overall structural strength. Consequently, after repeated cycles of depressurization and pressurization during flight, the weakened hull gradually started to crack and finally broke open in mid-flight on 25 May 2002, coincidentally 22 years to the day after the faulty repair was made upon the damaged tail. An explosive decompression of the aircraft occurred once the crack opened up, causing the complete disintegration of the aircraft in mid-air. 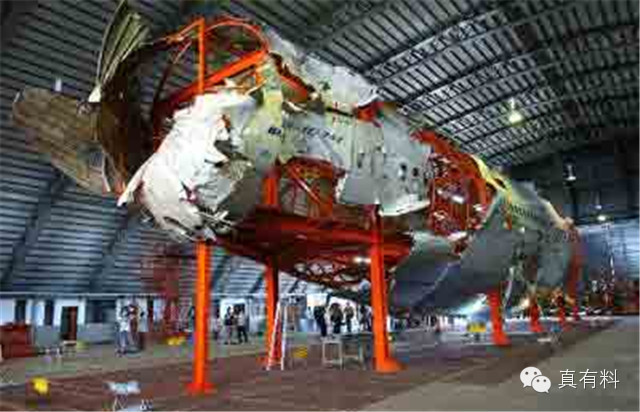 On April 28, 1988, an Aloha Airlines Boeing 737-200 lost part of the upper fuselage on a flight from Hilo to Honolulu. It diverted and landed in Maui. The accident investigation concluded that corrosion had not been detected and caused the failure of a lap joint.

The above events, specifically those of Japan Airlines Flight 123 and China Airlines Flight 611, bear a remarkable resemblance to #Flight9268 in all aspects of the accident, including the disposition of the wreckage, the broken tail section and rudder, explosive decompression, steep near vertical drop to the ground and lack of any warning or reaction time to the crew.

So far inquiries, with the aim to receive the final report of the tail strike in 2001 as well as clarify the extent of damage and who performed the repairs to Egypt's Civil Aviation Authority Accident Investigation, Airbus, Metrojet and Middle East Airlines have not been answered. However, in a press conference the chairman of Metrojet said that the repair in 2001/2002 was done by Airbus.

The investigators have stated that the cockpit voice recorder of Metrojet Flight 9268 shows an explosion and the flight data recorder confirms the explosion is not accidental – there is no sign of mechanical malfunction during the initial part of the flight, France 2 reported. But the fact remains that the only one evidence available in the black boxes is that they stopped recording suddenly, following an explosion, without any prior warning. So, is this enough to conclude that Flight 9268 was brought down by a bomb?

In my opinion, NO.

A failure at the tail section, that tore the tail off, would immediately also severe all electrical connections between the plane and the Black boxes, resulting in an instant loss of power and data to the recorders. They would register the explosive sound of decompression and then stop all recording due to loss of power and data connection as a result of this break-up. This is not evidence that the break-up occurred due to a bomb, but only that a break-up occurred! The evidence of a bomb needs to come from explosive traces and heat stress/damage that would occur at the site of the explosion…and at this time that vital evidence is still missing. The post mortem reports have not yet yielded any evidence of explosive traces on the bodies and the investigators have also not yet located any such residue on the aircraft structure from the tail section. There are also no visible signs of any nature of heat or fire damage to the tail section.

It is interesting that while the investigation is being led by Egyptian authorities with Russian and French collaboration, the statements have come from French investigators and the UK and US governments who do not even have investigators on ground; France is the home state of the aircraft manufacturer, Airbus! One wonders if there is an attempt here to shield the manufacturer from any possible liability due to failed repairs it carried out on the tail section way back in 2001? One also wonders if the UK and USA and other western powers have a motivated interest here to raise this rhetoric in order to link this issue with Russian involvement in Syria and then use this as leverage against Russia? Or is it merely an excuse to increase security expenditure and restrictions? Either way, it is a very deplorable and manipulative manner of taking undue advantage of a tragedy!

To me, as an accident investigator who takes pride in Aviation industry’s ability to investigate accidents to the root cause impartially and in an unbiased manner, in order to bring about corrective measures to prevent another, the manner in which the press and western leaders are responding to this event, as well as earlier responded to #MH17 accident is a serious cause for concern. I wonder if, like #MH17, the real truth about #Metrojet #Flight9268 will ever be known!

The Erring Human.
Posted by Unknown at 07:48

Kindly refrain from posting obscenity or advertisements. Users posting inappropriate or unrelated comments will be blacklisted from further postings. Thank you for your understanding and for maintaining the professionalism of this blog.