We woke-up today morning to a shockingly sad news of the loss of #Flydubai Flight #FZ981. Even before the fire caused by the accident had died down, I was shocked even more to read the first press reports attributing the accident of 'Pilot Error'! It appears that the so call Aviation Experts had already closed the case by arriving at the conclusion of Pilot Error caused by the weather! Such indiscriminate and nonsensical reporting aimed purely at TRPs and creating a fear phobia always causes discomfort and hence it is important at this time to do a proper analysis of what is known, what can be assumed and what are (some) of the essential facts the investigators will need to ascertain to be able to arrive at a balanced and scientific conclusion.

Two significant links have been posted on You Tube already that give us a very good indication of what might have transpired. Have a look at these two you tube links below.

The first link above tells a very significant tale. It shows the aircraft descending to the ground at a very steep angle of about 60 to 80 degrees! This is certainly not a flight that 'struck a wing' during a mishandled go around as has been reported in a section of the press. This is an aircraft totally out of control. The audio in the second link above is the radio communication between the ATC and the Pilot. At minute 7:17 it tells another very significant tale. The Pilot states, 'Going around...' and the tone of his voice at this point in time is totally composed, with no indication of any nature of panic or concern. It is a matter-of-fact statement that has been made almost like a song, which is indicative of a very relaxed state of mind. It is safe to conclude here that at the point when a decision was made to go-around, there was no immediate danger to the aircraft's safety.

One of my friends questioned me, is a go-around not an emergency? Just because the pilot elected to go-around does it not indicate that there was a danger? The answer to these questions is clearly NO. A pilot could elect to go-around for several reasons, but most commonly because the approach was not stabilized. In simple English this means that three or more parameters required to execute a safe landing had not been satisfied and if a go-around is not executed then the aircraft safety would be jeopardized. Therefore, to go-around is not an action as a result of the aircraft being in danger, but to prevent it from getting into a dangerous situation that has been foreseen by the Pilot. In this case, given the strong winds and unstable weather, it is not surprising that the pilots elected to go-around because the aircraft was clearly being buffeted and battered by the winds.

Another significant bit of news has emerged about the go-around maneuver in a tweet from #Flightradar 24 (@flightradar24). 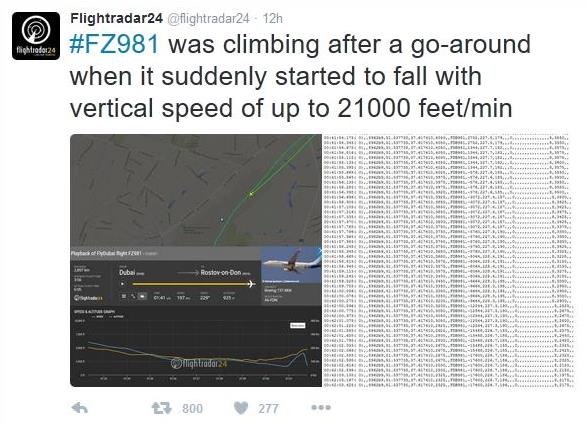 So, would a microburst alone succeed in developing a Rate of Descent of 21000 ft/min when the aircraft was at just about 5000 ft altitude and climbing? Maybe; but putting all the information above together, i.e. the relaxed state of mind of the pilot as evidenced from his calm voice, steep descent angle as seen in the security video and a ROD of 21,000 feet/min reported by Flight Radar, this does not seem to be a purely weather related case. While the bad weather might have played a role in this accident, but just the bad weather and even a microburst is not sufficient to explain such a sudden and steep descent into ground when the aircraft was already at climb power and in the process of going-around, already having achieved a steady climb momentum.

This then brings us to the next part of this puzzle. Is this an error made by the Pilot? Before we jump to that conclusion, we need to remember that pilot error, or human error as it ought to be called, is actually another name for an organizations failure to develop its human resource. As I have also brought out in my books 'Waiting... To Happen!' and 'I, Human', there are several sub-classifications of a human error, and all of them ultimately lead to a root cause of poor policies, procedures or training at the organization. So, those who are voicing the opinion of Pilot Error at this time, watch out... attributing this to pilot error actually amounts to an accusation that Fly Dubai, and its mother company Emirates Airlines, failed to develop their human resources... a claim one needs to think through a lot before stating, given the industry reputation and safety record of these carriers. Is it not possible that these airlines failed to develop their human resources? Well, it certainly is possible, but at this point in time there is insufficient evidence or historical record to arrive at this conclusion.

The next important question that comes to mind is, what do we know and where do we go from here?

From this, (at least) the initial work of investigators seems to be pretty well cut out. First they need to ascertain if there was any technical failure on board that resulted in this sudden and steep fall to the ground from a stabilized climb momentum. Could there have been a microburst of such astonishing power? Certainly yes, but it will need proof beyond any reasonable element of doubt to be believed. This could just as well have occurred due to severe aircraft icing, pilots disorientation, a serious technical failure or structural disintegration, like the loss of tail plane or a wing. Such nature of structural failures are not unheard of and there have been accidents in the past due to to these occuring in flight.

Further, one would like to look at other contributory causes. First and foremost question that begs an answer is, why in the first place the flight was holding for over 2 hours? What prevented the flight from diverting to another airport? What are the stated policies at Fly Dubai/Emirates with respect to such diversions? Is there any evidence of deviation from this stated policy? Is there any evidence of pilots being 'disciplined' officially, or unofficially, for diversions? Was there any nature of communication between the aircraft and Fly Dubai operations control during this 2 hours hold period and was a diversion discussed at all? In short, it seems very odd that the flight chose not to divert and the the reasons for this need a lot of investigation.

Then is the question of why the flight was at all permitted to depart from Dubai in the first place when the departure weather made it clear that the conditions on arrival will be below minima? Was there a communication lapse at the ATC level? at Flight Dispatch level? at operations control level?

The flights data recorders have been recovered, but if the investigation is to be done properly, not with the intention of finding someone to blame but with the intention of preventing another accident, then the investigators would need to look far beyond the flight data recorders. I hope that they will have the mandate, support and the will to do so.

The Erring Human.
Posted by Unknown at 15:03 No comments: