#Germanwings 9525: Preliminary report and way ahead

The investigation team, under the lead of French BEA, has published a preliminary report on the accident to #Germanwings flight 9525 and the full report can be access here: http://www.bea.aero/docspa/2015/d-px150324.en/pdf/d-px150324.en.pdf

While the report does not tell us too much more than what has already been made public in the press, it does clarify some important technical doubts that have been voiced in various social media as well as my earlier posts.

On the issue of “Human Breathing”, the report states as follows, Quote “A sound of breathing is recorded both on the co-pilot track and on that of the Captain throughout the accident flight. This breathing, though present on both tracks, corresponds to one person’s breathing. It can be heard several times while the Captain was talking (he was not making any breathing sound then) and is no longer heard when the co-pilot was eating (which requires moving the microphone away or removing the headset). The sound of this breathing was therefore attributed to the co-pilot.” Unquote.

It is very interesting to note that even the Captains microphone recorded only the Co-pilots breathing, while not recording Captains breathing or even that of the flight attendant who was present in the cockpit for a short period of time. As I had mentioned in an earlier post on this blog, if any sound of breathing is recorded in a CVR tape, it cannot be normal breathing. This statement is now corroborated by the fact that even the Captains mic, that was very close to his face, recorded only the Co-pilots breathing and not of the Captain. We have evidence here that the Co-pilot was certainly not breathing normally, and not just when the Captain was absent from the cockpit! The co-pilot was clearly in distress on that fateful day and it is surprising that this very audible sign was missed by all around him. There is certainly a need here to probe deeper into this aspect of evidence and if the crew underwent any nature of pre-flight medical evaluation on that day or, if this heavy and abnormal breathing was also noticed by any of the ground crew (eg. Flight Despatchers) who interacted with the Pilots prior to departure and while on ground in Barcelona. It will also be significant here to understand if there was any change in the rate, volume or frequency of this breathing sound, especially at the time when Captain left the cockpit.

Another very significant detail in this report is the revelation of what transpired during the onward flight to Barcelona. The Captain apparently left the cockpit at 07:20 hrs. The aircraft then received instructions to descend from its cruise altitude of 37,000 ft to initially 35,000 ft and later to 25,000 ft. and the co-pilot descended the aircraft according to these instructions, stabilizing correctly at 25,000 ft. So far nothing is unusual. What is surprising here is the manner in which this descent was carried out by the Co-pilot. Instead of making a selection to 35,000 ft and later changing that to 25,000 ft, he appears to have been “playing around” with the auto-pilot controls. As the graph below depicts, he made multiple, seemingly random changes, varying from the minimum possible selection of 100 ft to the maximum possible selection of 49,000 ft! This behaviour is highly unusual and needs some evaluation. The press is going viral calling it a practice of what was to follow or even an aborted attempt to intentionally crash the aircraft. However, to my mind, this might represent something very significantly different. To me, this represents the behaviour of someone experiencing psychomotor problems…essentially, a lack of coordination between mind, eyes and hands! He seems to be hunting for the correct selection and unable to reach one. It could also represent a casual attitude or lack of seriousness, even indecisiveness. All of these could, in turn, be related to the reported psychological distress caused either because of mental depression or maybe, a more serious and undiagnosed state of Schizophrenia. 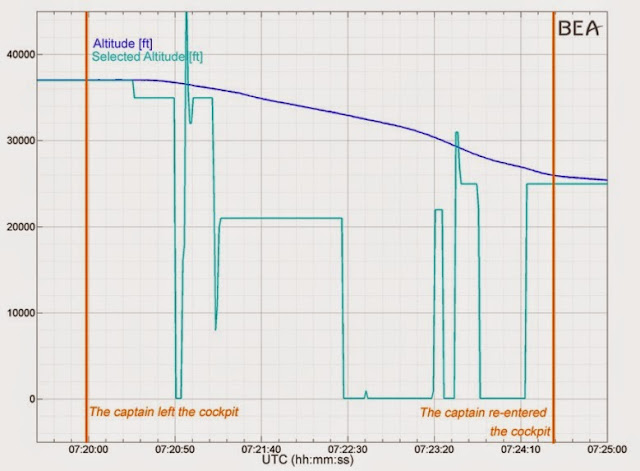 While the aircraft was correctly descended according to ATC instructions and stabilized at the requested level, the manner of achieving this was irregular and reflective of state of mind of the pilot. A deeper psychiatric evaluation is certainly necessary here and I hope BEA is investing sufficiently into such nature of professional evaluation.

A similar behaviour is also noted in the minutes leading to the crash. The report states,

“At 9 h 33 min 12 (point 5), the speed management changed from “managed” mode to “selected” mode. A second later, the selected target speed became 308 kt while the aeroplane’s speed was 273 kt. The aeroplane’s speed started to increase along with the aeroplane’s descent rate, which subsequently varied between 1,700 ft/min and 5,000 ft/min, then was on average about 3,500 ft/min.

Once again, we see evidence of “playing around” with speed selections…either unable to make a selection or undecided on what selection to make, or maybe just playing with the selector knob like a fidgety child.

Another significant aspect highlighted in the report occurred just after the Captain left the cockpit. The event is documented as follows: 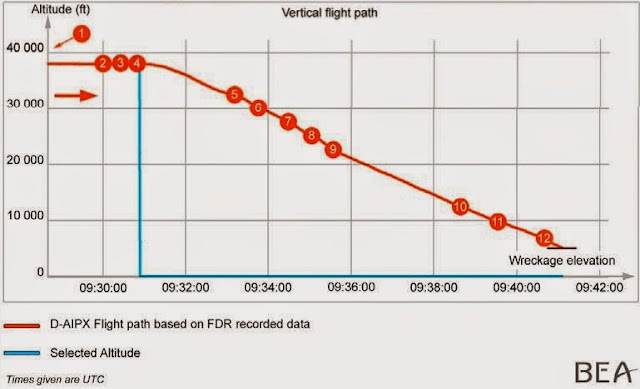 The Co-pilot was seated and settled in his seat. He had been flying for some time. So, why at this point should there be any need to move/adjust his seat? Did he at this point move from his seat to the Captains seat? Did he have a reason to leave his seat? It will be significant to note if there were any changes in his breathing pattern at this stage because then there is another item in the report that causes concern. The report documents, “low amplitude inputs on the co-pilot’s sidestick were recorded between 9 h 39 min 33 and 9 h 40 min 07” and then again, “An input on the right sidestick was recorded for about 30 seconds on the FDR 1 min 33 s before the impact, not enough to disengage the autopilot.” Both these texts refer to the same event, although they appear in different sections of the report.

Was this a last minute attempt by a man struggling to regain control of his own body to recover and save the situation?

Yet another significant aspect of this report relates to the cockpit door access alarm. “At 9 h 34 min 31 (point 7), the buzzer to request access to the cockpit was recorded for one second.” Further,

In the description of the door locking system fitted in the accident aircraft, it states that, “…To request access to the cockpit from the passenger compartment, the normal one-digit access code followed by ‘‘#’’ must be entered on the keypad. A one-second acoustic signal from the buzzer sounds in the cockpit to warn the crew that someone wishes to enter…The flight crew then moves the three-position switch:

It is significant that after just one access request at 09:34, no further request is recorded on the door lock. It is reasonable to assume at this point that the selector switch inside the cockpit was put in “Locked” position, thereby disabling the keypad for 5 minutes. However, did the Captain not know about this 5 minute interval? Why did he not make yet another attempt 5 minutes later, at about 09:39 to use his emergency access code?

As highlighted in my earlier blogposts also, human error is not a disease. It is a symptom of the disease called “Poor Organizational Management”. Several flaws in Germanwings and Lufthansa management have been highlighted by this accident and it is those shortfalls in management that created the setting in which the accident scenario could be played out. Lufthansa has much to learn from this accident about management of human resources and about preventing humans from erring. As for Germanwings, if they thought safety was expensive, they have now had a taste of an accident. The writing is already on the wall…investors have already decided to liquidate the Germanwings brand and merge the assets with Europewings. This is not the first time an airline has had to be liquidated because of an accident, and unless the managements learn very quickly about managing humans like humans and not objects, I fear that this will not be the last time also!