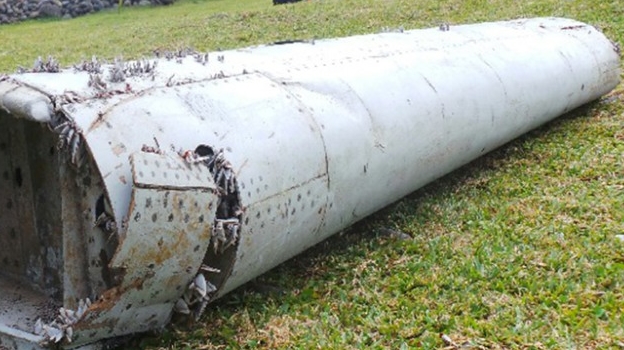 After almost 17 months of confusion and false starts, finally the ocean seems to have decided to give-up its secrets. The above piece, which has been identified as the left Flaperon from a Boeing 777 aircraft, washed-up on a beach in Reunion Island on 29 Jul 2015.

While the object is presently on its way to the BEA (the French aircraft accident investigation agency), investigators have concluded, based on photographs and videos, that the object came from a Boeing 777, and Flight 370 is the only Boeing 777 known to be missing. Therefore, there is little doubt on what the official investigation will conclude in a few days’ time, once their investigation is complete.

Flaperons are control surfaces on the wing of an aircraft that help to stabilize the plane during low-speed flying during take-off and landing. They combine the functions of flaps and ailerons. Flaps are used to create lift or drag depending on their use, while ailerons keep the plane from rolling over. They are generally at the rear, or the trailing edges, of aircraft wings. They are deployed during take-off and landing and stowed during flight. They combine with other parts of the wing to increase the surface area of the wing when the aircraft needs extra lift. If you look outside a window seat while seated at a location over the wing end, or slightly behind it, you will be able to see the Flaperon rolling out with a humming sound when the aircraft is coming in to land. On take-off, they are extended while the aircraft is still on ground, and pulled in when the aircraft reaches a safe altitude. You can see these parts move during the flight. The flaperon on a Boeing 777 sits between two sets of flaps on the inside segment of the wing right behind the engine, though the location can vary depending on aircraft type.

So, where does this lead us? Unfortunately, there are still no quick answers. Such a small part is unlikely to provide any concrete clues as to what happened to MH370, or even where it crashed. However, as can be seen from the below drift model map which was drawn-up by the Australian researchers over an year ago, location where this has been found is consistent with the 12-18 month drift model, and this tells us that, in all probability, the search efforts are focussed in right area of the ocean. 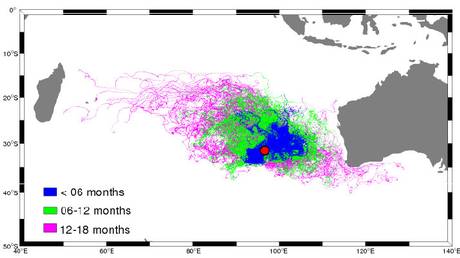 Further, if there is one piece, then there are also likely to be other pieces in that area. This boosts confidence that in days to come we may be able to recover many more debris from MH370, not only from Reunion Islands, but also from other coastal areas as per the drift model. If that happens, the story which will emerge from analysis of a number of pieces could be very different from what we can gleam from just one piece. 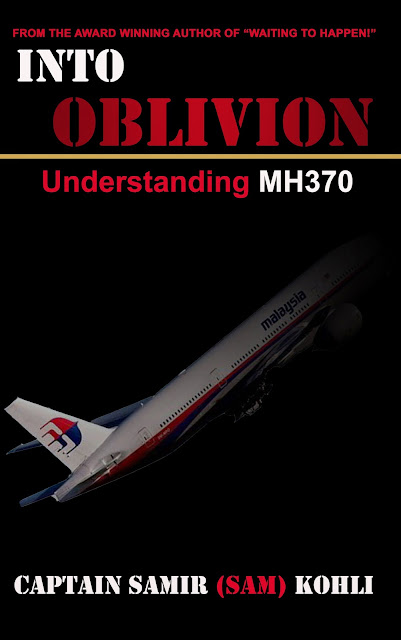 One thing is certain, the position of crash as predicted in my book “Into Oblivion: Understanding MH370” stands vindicated. There is now no doubt that the aircraft ended its flight in the Southern Indian ocean and in the general area as calculated and published in “Into Oblivion”. The end of this unfortunate drama has begun and I am hopeful that it will reach its conclusion before too long.

The Erring Human.
Posted by Unknown at 05:52 No comments:

As a result of its work, the Task Force delivered a set of 6 recommendations to the European Commission on 16 July 2015, as follows:

Following the 11 September 2001 attacks, several measures were introduced to mitigate the risk of unwanted persons entering the cockpit. Secure cockpit door locking was rapidly mandated, and rules were subsequently fine-tuned to address the risks in the areas of rapid aircraft depressurisation, double pilot incapacitation, post-crash cockpit access, and door system failure including manual lock use.

The focus for all the measures that were introduced was put on the threat from outside of the cockpit. A potential threat from inside the cockpit was not fully considered in either the initial phase or the period that followed, when the regulations were fine-tuned.

As I have also pointed out in my earlier blog posts in this blog, the risk mitigation measure introduced to mitigate the risk of unlawful interference (Secured Cockpit Door) has actually facilitated the very event it was meant to prevent! There have been many cases, even before #GermanWings 9525, where the secure cockpit door was locked from inside by a rouge pilot, preventing the other pilot from entering, while he proceeded to unlawfully interfere with the flight by hijacking or crashing it. The risk mitigation measure had been introduced and implemented in a hurry, without a full assessment of Residual Risks or Additional Risks created by its implementation.

Unfortunately, the task force has missed the bus! They have chosen to limit themselves to the “2-persons-in-the-cockpit recommendation”, instead of being more creative and developing further on this base to introduce more security measures in addition to merely two-persons-in-the-cockpit. The technology today has advanced considerably since the days of 2001 and many additional and secure measures are today possible beyond the mere four digit numeric code to lock or open a door. These additional measures, like biometrics etc., are not only readily available but are competitively priced and readily implementable.

I was reminded by my colleague, Carlo Cacciabue, of Professor James Reason’s ground breaking research and work on Safety Management Systems. He used to say, mistakes by humans, be they errors or violations, are like mosquitoes. You can try to swap them individually, but they will keep coming back. The only way to save ourselves from being bitten is to drain the swamps where these mosquitoes breed. All human performance happens inside an organizations policies and procedures. Erroneous or insufficient policies/procedures are the swamps where these mosquitoes called errors and violations breed. Unless we develop organizations measures to prevent breeding of these mosquitoes, we will never be able to prevent another event like #GermanWings 9525!

It is very unfortunate that the EASA Task Force has failed to deliver any meaningful recommendation. One did not need a task force to arrive at the very basic and on-the-surface kind of recommendations that have emerged here. We all knew this within days of the accident. What one expected from a task force of this level was a more professional risk assessment and recommendations in tune with the complexity of the problem. The task force needed to go into the depth of this problem and emerge with recommendations with far reaching impact on safety of civil aviation. It needed to develop organizational policies and procedures for dealing with distressed employees and those that need help, in addition to a complete relook and revamp of how we secure our cockpits.

Once again, it has been forgotten that at the end of the day, pilots are as human as rest of us and susceptible to as many human problems and issues as the rest of us. Any human can be regulated only to a certain extent. There is a limit to the amount of stress and regulation that can be piled onto a specific job role. The Pilots are the goal keepers of the Aviation industry…and a goal keeper can only save so much if rest of the team does not support the aim of winning the match! 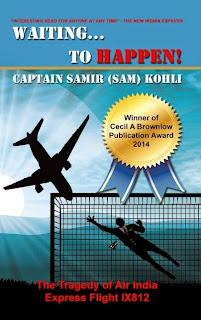 An opportunity has been missed, and yet another accident, similar to #GermanWings remains waiting…“Waiting…To Happen!”.

The Erring Human.
Posted by Unknown at 02:50 No comments: